Hercules Magusanus is a god who was honored in several places within Celtic Europe. His name indicates the interaction between Germanic/Celtic and Roman culture. The name Magusanus can be interpreted as Germanic or Celtic. It may even have been a transition from Celtic to Germanic. The name is probabaly a collection of the words Magus* (young/youth) and Senos* (old). This seems a contradiction, and points towards a magical, mythical origin. The meaning of this name has been interpreted (as read in Herman Clerinx, see below) as ‘vivid elder’ or ‘youth with the experience of an elder person’.

In the Netherlands, traces of his worship can be found in the ancient Roman border area in the provinces of Noord-Brabant and Gelderland.

Shown below is an 8 cm. tall bronze statue of the god, found in the temple of Empel, and currently kept in the Noord-Brabants Museum in ‘s-Hertogenbosch. 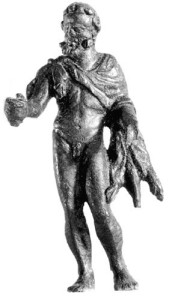 Another temple dedicated to Hercules Magusanus stood in Elst (Gelderland, the Netherlands). This temple did service between ca. 100 – 300 CE. Before there was a Gallo-Roman temple, the site was likely an open-air sanctuary, since traces of older religious practices have been found. Elst was a very important center to the Batavian people, and it is therefore thought that Hercules Magusanus could have been their main god.

Herman Clerinx (see source) names two reasons for the worship of Hercules Magusanus by the Batavians: