Sandraudiga is known to us only through one votive stone found in the southwest of the Netherlands, in Zundert (Noord-Brabant). Her name is carved on the altar stone, which is 1.42 m high and dates from the 2nd or 3rd century CE. The inscription reads: “Deae Sandraudigeae Cultores Templi”.

As the inscription suggests, the remains of a temple were found after the altar in the same area, but they are too sparse to draw conclusions from. The sides of the altar stone show large cornucopiae – which connects Sandraudiga to the many other mother goddesses known in (Romano-)Celtic and Germanic cultures from the same period, who carry large baskets with fruits (such as Nehalennia). Apart from this clue, nothing is known.

Even her name is a mystery. One very poetic suggestion is “she who dyes the sand red”. Others connect the Sandr-part of the name to Zundert, where her altar stone was found. These are only suggestions, which I write down for completion’s sake. 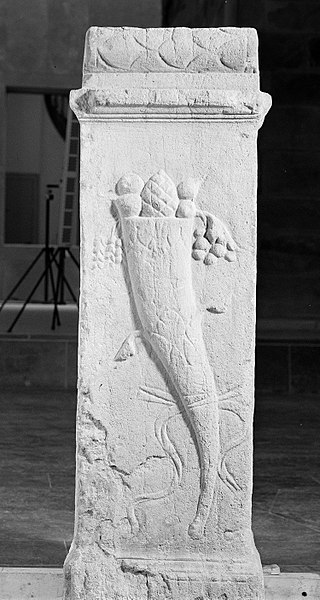 Altar stone of Sandraudiga, seen from one side, Rijksmuseum van Oudheden, CC BY-SA 3.0, no changes were made to this image.