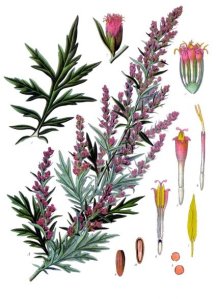 Mugwort can be found almost anywhere in Northwest Europe, especially in fields and on waysides. It can grow up to one meter tall. The flowers are small and mostly purple, but can also be yellow. The leaves are lobed and pointy, and have light undersides.

The name ‘mugwort’ is said to stem from the tradition of this plant being used for flavoring beer, before hop took its place. The dried plant was used for this, since the fresh plant was considered unsuitable. In Cornwall in the 19th century, the dried leaves of mugwort were used as a substitute for tea by poor people.  Other say that the name mugwort derives from moughte – moth or maggot – since it keeps moths at bay.

Mugwort is a popular protector. Travelers especially would carry it with them, to protect them against, fatigue, strokes and wild animals. On St. John’s Eve (Midsummer eve) a crown of mugwort would be worn against evil spirits, and the plant is actually known as Cingulum Sancti Iohanni (not to be confused with St. John’s Wort).